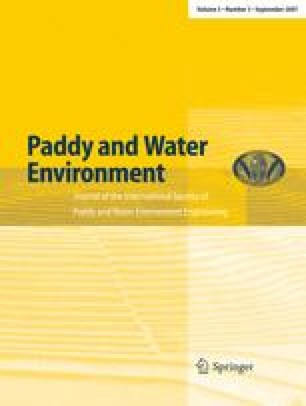 The objective of this research was to investigate the effect of water stress in regulated deficit irrigation (RDI) on the yield of soybean growing on Ultisol soil. This research was conducted under plastic house on the experimental farm of Lampung Polytechnique from August to November 2004. The water stress treatments in regulated deficit irrigation were ET1 (1.0 × ETc), ET2 (0.8 × ETc), ET3 (0.6 × ETc), ET4 (0.4 × ETc) and ET5 (0.2 × ETc), arranged in a randomized block design with four replications. ETc means crop evapotranspiration under standard condition, which was well watered. For example, the ET2 (0.8 × ETc) treatment means that the amount of supplied water per a day is the same as the crop adjustment evapotranspiration (ETcadj) with the value 0.8 of water stress coefficient (K s). The RDI treatments were carried out just at vegetative phase and its treatments were stopped at the beginning of flowering phase, and afterwards the treatments were watered at 1.0 × ETc. The results showed that since week II, the soybean experienced stress throughout the growth period except ET2 treatment. ET2 treatment started to be stressed at week V and continued to be stressed until the harvest time. At the ET3 treatment, the critical water content (θc) of soybean was reached at week II, and the θc was 0.24 m3/m3 on the average. The RDI at vegetative period significantly affected the yield. The highest yield was ET1 (35.2 g/plant), followed by ET2 (31.0 g/plant), ET3 (18.1 g/plant), ET4 (7.6 g/plant), and ET5 (3.3 g/plant). The optimal water management of soybean with the highest yield efficiency was regulated deficit irrigation with water stress coefficient (K s) of 0.80 for vegetative phase.

However, efficient use of water resources depends on reducing water losses, which can be minimized through use of new irrigation techniques such as irrigation programs with deficient evapotranspiration. Demand for evapotranspiration (ET) can be reduced either through agronomic measures or use of deficit irrigation programs. The main approach in deficit irrigation practice is to increase water use efficiency by partially supplying the irrigation requirement and allowing water stress to planned plant during one or more periods of the growing season with the least impact on crop yield (Kirda et al. 1999).

The yield of soybean in the dry season with adequate irrigation was 1.97 ton/ha, but in the wet season was 0.61 ton/ha (Baharsyah et al. 1985). Usually, soybean is planted in paddy fields after the second harvesting of the paddy rice at the end of rainy season, through the dry season. Therefore, water availability becomes a limiting factor of production, so that the possibility of implementing deficit irrigation method is inevitable.

Value of K s is important for estimating ETcadj, so that the deficit irrigation scheduling can be made. K s describes the effect of water stress on crop transpiration (Allen et al. 1998).

Based on the explanation above, it is necessary to find an efficient and effective use and management of water so that the soybean cropping area can be increased; therefore it is important to know the K s value in RDI condition. So, if these values were known and full irrigation was restricted by the availability of water, the deficit irrigation can be applied, which allows maintaining soil water content below full irrigation at certain growth period, to achieve an optimal yield. The objective of this research was to investigate the effect of water stress in RDI at vegetative phase on the water use efficiency of soybean (var. Willis) in the frame of optimum water management.

This research was conducted under plastic house in an experimental farm of Lampung Polytechnique from August to November 2004. Soybean cultivar used was Willis. The soil was sandy loam in texture and classified as Ultisol. Soil water content at field capacity (34.7 kPa) was 0.352 m3/m3 and wilting point (1,585 kPa) was 0.223 m3/m3. Therefore, total available water (TAW), that is the total soil water content between field capacity and permanent wilting point, was 0.128 m3/m3. The elevation of site was 43 m above sea level. The average air temperature was 26.3°C and the relative humidity was 60.8%.

The water stress treatments in RDI imposed were: ET1 (1.0 × ETc), ET2 (0.8 × ETc), ET3 (0.6 × ETc), ET4 (0.4 × ETc) and ET5 (0.2 × ETc) arranged in a randomized complete block design with four replications. The area of each treatment plot was 1 × 1.5 m2, and the distance between plots was 1 m. The RDI treatments were given just at vegetative phase (1 month after planting) and its treatments were stopped at the beginning of flowering phase, and afterwards the treatments were watered at 1.0 × ETc (see Fig. 1). On the day before planting, the soil was saturated with water, and irrigation was given at two days interval by handycan. For example, the ET2 (0.8 × ETc) treatment means that the amount of supplied water per day is the same as the crop adjustment evapotranspiration (ETcadj) with the value 0.8 of water stress coefficient (K s). The amount of each irrigation was the same as the 2 days accumulated ETcadj according to the treatments. ETcadj was calculated by formula (1), and ET o was measured by class A pan with pan coefficient (K pan) being 0.8 and crop coefficient (K c) of soybean being 0.75 (the average value for the whole period). The values of K pan and K c were referred from Doorenboos and Kassam (1979). The emerged seedlings were pruned to maintain only two healthy seedlings per seedling hole. Fertilizer application of urea at 50 kg/ha, triple super phosphate at 75 and 75 kg/ha muriate of potash were applied. The soybean plants were sprayed with insecticide to protect them from insect attack at least twice a month. The growth period of soybean plant was 85 days, and 2 weeks before harvesting, the irrigation was stopped.

Agronomic variables evaluated in this research were plant height, leaf, flower and pod numbers, wet weight of total biomass and yield, WUE, and yield efficiency (YE). WUE (g/mm) was calculated as the ratio of total biomass (g/plant) to the total irrigation (TI), and YE (g/mm) was calculated as the ratio of yield (g/plant) to TI (mm). Statistical analysis using F-test at 5% significant level, followed by LSD (Least Significant Different) test at the same level was carried out.

The effects of water deficit on plant growth indicators are shown in Table 1. It can be observed from this table that based on plant height and leaf number at week II, the soybean experienced stress throughout the growth period except ET2 treatments. ET2 treatment started to be stressed at week V and continued to be stressed until week VI, which was shown by the pod number of ET2 treatment. This stress condition was continued until the end of growth, which was shown by the total biomass and yield at ET2, which were significantly different compared to ET1. The plant height at ET1 (43.9 cm) was the highest at week VII, and significantly different compared to ET3 (37.2 cm), ET4 (28.5 cm), and ET5 (17.1 cm). Similarly the leaf number at ET1 (61.0) was the greatest at week VII, and significantly different compared to ET3 (48.0), ET4 (42.5), and ET5 (15.1).
Table 1

The effect of water stress at vegetative phase on the plant height, and leaf number

The effect of water stress at vegetative phase on the biomass, yield, TI, WUE, and YE

Based on the explanation above, it is clear to understand that the soybean plant experienced initial stress from week V at ET2, and from week II at ET3 to ET5, and remained in the stress condition until harvest time.

Water use and yield efficiencies

Table 3 shows that the effects of RDI at vegetative phase on the WUE and YE were significantly different. RDI treatments of ET3–ET5 showed significant difference compared to ET1 (as a control).

The value of TI in Table 3 was assumed to be same with the total irrigation for the whole growing period (see Table 4). It can be seen from Table 3 that even though there is no significant difference between ET2 and ET1 treatments in WUE and YE, there is significant difference in yield per plant. So the ET1 treatment is the greatest in yield per plant, WUE and YE.
Table 4

Figure 2 shows that the soil moisture content of ET1, which is a full irrigation treatment (1.0 × ETc), was relatively constant since week II until the end of irrigation period at 0.243–0.266 or 0.253 m3/m3 in average. It means that the actual evapotranspiration of soybean at ET1 was balanced with the amount of irrigated water estimated using the value of K c = 0.75.

According to the result in Table 5, the K y value of ET2 treatment was 0.59, which meant that ET2 treatment responded to deficit irrigation because of K y < 1. Bustomi Rosadi et al. (2005) also showed that the optimum yield of soybean plant (var. Willis) with the highest efficiency was reached by deficit irrigation that maintained the soil water condition at the level of 40–60% of available water deficit with K y = 0.611, and could conserve 10.1% of water. The K y of the optimum yield of this laboratory experiment was almost same with the K y of ET2 treatment, which was 0.59. However, the effect of the treatment to the WUE and YE at ET2 was not significantly different compared to ET1. So, there remains question if the calculation of YE at ET2 was right. Principally, if ET2 treatment responded to the deficit irrigation, the YE of ET2 must be higher than ET1.

Based on Fig. 2, it was found that the soil water content at ET2 was higher than ET1 treatment. It was happened because the soybean plant really continued to be in stress condition after week V (see Tables 1, 2). So, if the plant was irrigated by the same volume with ET1, some water could not be really used by plant and may be lost as gravitational water or still remained in the soil as shown in Fig. 2, and the value 200.4 mm at ET2 in Table 3 is supposed to be more than the real crop water requirement. Those same phenomena were also happened at ET3, ET4, and ET5 treatments.

So, if the ET2 treatment was irrigated by the amount of water such as actual evapotranspiration since week V, there was a possibility that the total irrigated water could be decreased and the value of YE could become bigger than the results as shown in Table 3. It is important for completing optimal water management in RDI to estimate the actual evapotranspiration after vegetative phase without yield decrease.

However, this water management cannot be applied to the other fields with different soil and meteorological conditions, which could affect strongly soil moisture consumption by soybean plant. This research could propose how to determine the water stress coefficient in regulated deficit irrigation with the highest yield efficiency of soybean on the field.

Thanks are due to Omi Istiawati for her help in conducting this experiment.